Glass noodle salad is my favorite Thai dish. It is gluten-free as the glass noodles are made from mung beans and it's very refreshing. Specially the best on a hot humid day when you feel you don't have energy to do anything. Yum Woon Sen will wake your soul up!

In Thailand glass noodles are considered to be good for weight loss. These noodles are made from starch (carbs!) but they absorb a lot of water, so you end up eating less carbs. Plus with all the vegetables and lean protein that goes into this salad, it is definitely a low-calorie choice compared to spaghetti bolognese.

Yum means "salad" and Woon Sen is "glass noodles. This is literally a "glass noodle salad" and as much as I love the original, today I'd like to remake this with vegan ingredients.

I do feel it is missing the punch form the fish sauce but it still has that kick with the fresh herbs and spices. Personally I do not like dried shrimps so I do not miss that bit!

We did use some recycled ingredients form the Vegan Tom Yum Soup (Kombu Kelp and Shiitake Mushroom) that we will introduce to you next week which is totally NOT traditional Thai at all but I thought it works with the recipe. If you don't have this on hand you can skip this part! 1. Soak the glass noodles in room temperature water for 10 minutes until it becomes soft. Drain them and set aside 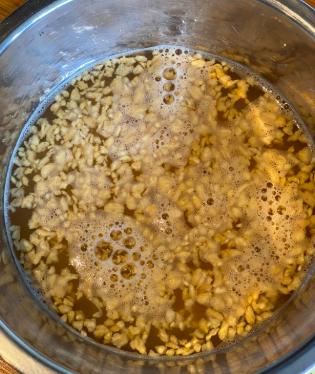 2. Soak the soya mince in water for 5 minutes. Squeeze and rinse twice to get rid of the soy flavor and set aside. 3. Prepare the vegetables for the salad. In a large mixing bowl, place the cherry tomatoes that are cut in halves, Chinese celery stalks cut into 4 cm length, kombu into thin strips (2mm is ideal!), and the shiitake sliced into 3 mm slices. 4. Cut the coriander stems into small chunks and place in the mortar and make a paste. Add the garlic (it will be easier to chop them a bit first!), bird eye chilies and grind it down into the paste. Then add the coconut sugar, 2 Tbsp. of the fysh sauce and lemon juice then mix well. 5. Boil 1 litter of water in a medium pot and add glass noodles. Boil for 2 minutes. Remove the noodles from the water (Keep the water for boiling the mince!)  place it into a strainer with tongs to remove excess water and cut them into 1/4 with a kitchen scissor. Plase the noodle into the large mixing bowl with the vegetables. 6. Add the soya mince into the remaining liquid and cook for 1 minute. Use a strainer to remove from the boiling water and place it into a small bowl. Add 1 tsp. of fysh sauce and 3 Tbsp. of toasted sesame oil onto the mince and allow the flavors to infuse. 7. Add the mince into the mixing bowl, pour the dressing over and quickly toss to combine with the coriander leaves too. 8. Crush the cashews in the mortar. 9. Plate the salad and sprinkle the crushed cashews and serve fresh! Enjoy :)